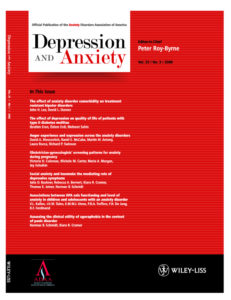 Living through a traumatic event is an unfortunate reality for many people with each episode resulting in varying recovery timelines and potentially long-term effects. When lasting effects result in daily challenges to normal activities, a diagnosis of post-traumatic stress disorder (PTSD) can trigger a treatment protocol of medications, counseling and support to help manage ongoing avoidance and arousal symptoms, and the cognitive decline that can often occur simultaneously.

Numerous events can cause PTSD, such as personal assaults, serious accidents and weather disasters, affecting both men and women, but research studies have primarily focused on male veterans and the armed conflicts that they endured. While much has been learned from this focus, there is a need to understand the longitudinal cognitive effects of PTSD on women.

In research published this month in Depression and Anxiety, a large cohort of female nurses participating in the Nurses’ Health Study II were invited to complete a self-administered, online version of the Cogstate Brief Battery, a computerized cognitive test battery, to assess their psychomotor, attention, visual learning and working memory abilities. This group of 14,151 women (mean age of 60.3) had reported a history of trauma exposure and PTSD on a 2008 supplemental questionnaire and were willing to participate in follow-up testing. Included in that questionnaire was the Center for Epidemiologic Studies Depression (CES-D) scale to assess depression.

Next, each woman was given online access to the Cogstate Brief Battery, consisting of four computerized tests; Detection (psychomotor), Identification (attention), One Card Learning (visual learning) and One Back (working memory). The Cogstate Brief Battery has been shown to have high criterion and construct validity showing subtle, early signs of cognitive decline in both supervised and unsupervised settings. Previous research has shown that combining the tests into composites show high test-retest reliability and clinical utility, so Detection and Identification was combined as was One Card Learning and One Back.

The association with cognitive decline on the Cogstate Brief Battery was strongest when factoring in both elevated PTSD and depression symptoms.

“To our knowledge, this is the first study to demonstrate that elevated lifetime PTSD symptoms are associated with worse cognitive function in a large civilian sample of middle-aged women,” wrote the researchers.

“Traditionally, cognitive function research has focused on older persons; however, it is increasingly clear that cognitive decline starts in mid-life. Future research is needed to examine how PTSD symptoms in civilian women relate to trajectories of cognitive decline over time and if they predict faster onset of disorders such as dementia.”