Martyn Myer AO, Cogstate Chairman, Reflects on the History of the Company and Neuroscience Research in Australia

This month we observe the 20th anniversary of Cogstate. As we hit this key milestone in our efforts to further brain health assessment, my thoughts have gone back to the beginning of my family’s involvement in neuroscience research, decades before Cogstate was even an idea. It has been a meaningful journey for my family, for me personally, and hundreds of others. As such, I felt it appropriate to share a few memories and highlights.

Development of the Florey

My family is proud of our long association with neuroscience research in Australia. In the 1960’s, my father, Kenneth Myer, was one of a handful of people responsible for the creation of the Howard Florey Institute of Experimental Physiology and Medicine. The Florey (as it is now commonly known) went on to become the Florey Institute of Neuroscience and Mental Health, Australia’s largest and one of the world’s most respected brain research centres. At the Florey, over 600 medical researchers work on a range of serious diseases including stroke, epilepsy, Alzheimer’s, Parkinson’s and motor neuron diseases, depression and addiction.

On May 3, 1960, a Melbourne-based newspaper called The Age, described the beginnings of the Florey as such: “Two leading Melbourne businessmen have guaranteed … that they will raise 150,000 pounds to assist medical research. The money will be used to build a research block. The deputy chairman and joint managing director of Myer Emporium Ltd., Mr Kenneth Myer, and the senior partner in a Melbourne stockbroking firm, Mr Ian Potter…will underwrite the sum of not less than 150,000 pounds.”

From there, the Florey attracted interest from philanthropists around the world, and it would go on to play an important role in the development and adoption of Cogstate science and technology in Alzheimer’s disease research.

After my father tragically died in an aircraft accident in 1992, I joined the board of the Florey and became President in 2004. During this time, together with the Director, Fred Mendelsohn, we created the Florey as it is today through the merger of the original Florey, the Brain Research Institute, the National Stroke Research Institute and the Mental Health Research Institute. At the same time, we raised the ~$165m to construct two new buildings, one on the University of Melbourne campus in Parkville and the other at the Austin Hospital in Heidelberg. In honour of my father’s contribution to the establishment and development of the Florey the building in Parkville is named after him. 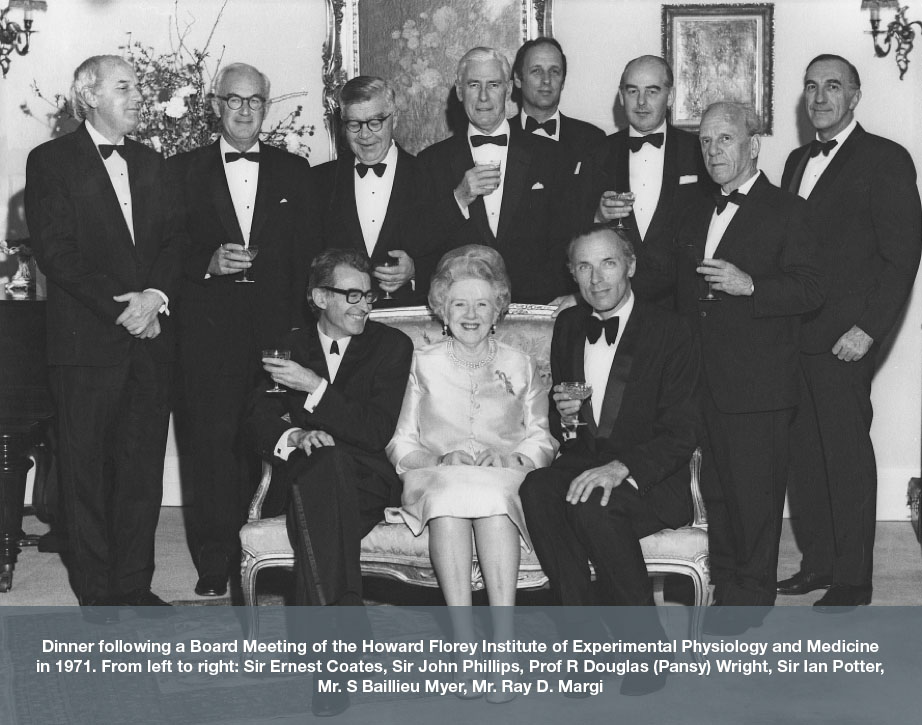 Tragically, and quite ironically, during the 1990’s, as a family we experienced first-hand one of the most devastating neurological conditions when my mother was diagnosed with Alzheimer’s disease. Like many families faced with dementia, we went through the difficult process of diagnosis and lived with the fact that there was no effective treatment to help our mother.

In the late 90’s, around the same time as my mother was suffering from Alzheimer’s, an old school friend of mine, Dr. David Darby, came to me with an idea to use technology to simplify the measurement of cognition. He said the technology he was developing would allow for repeat assessment with highly sensitive measures. Further, he explained that the use of the technology would allow initial cognitive testing to be taken out of the hands of expensive specialist medical practitioners (such as neurologists and neuropsychologists) and allow trained staff to administer the tests.

To me, this sounded amazing. The technology would allow us to take cognitive assessment beyond specialty centers and into the community where it could help meet the need for early detection of decline.  Our ambition was to make regular cognitive assessment as simple and common place as measuring blood pressure – something that everyone should do periodically as part of good healthcare.

In an aging population, with an increasing incidence of Alzheimer’s disease, the need for the product seemed profound.

Therefore, I worked with Dr. Darby to find a small number of similarly likeminded people to provide the original “angel” investment to enable work to begin on building the first version of the technology.  We formed Cogstate in December 1999 and David got to work on the first code base that would become the foundation of Cogstate.

The science behind the original idea was intriguing to me. It was based on work that our Chief Science Officer, Dr. Paul Maruff had been doing in the indigenous communities in central Australia. Many of the first tests used playing cards as the stimuli – what Paul realized was that the playing cards were a well understood construct that would translate into almost all nationalities, languages and cultures. Paul discovered that he could use the cards as the constant stimuli, but by changing the question he was asking about them, he could change the cognitive domain that was being assessed.  The magic of Cogstate was in the simplicity!

The simplicity of the tests also meant there was very little learning effect – that is, having done the test before did not make you better at the test the next time you completed it. This allowed the Cogstate science team to focus on the measurement of change in an individual, asking questions such as “Are you the same as you were before?”. Whereas, historically cognitive assessment was focused on comparison of the individual to a normative database to determine if the result was within a normal range, the Cogstate assessments asked if the individual had changed, using the same person as his or her own comparator.

However, simplicity in science is not necessarily an easy thing to sell to an investment community.  As the work at Cogstate gathered steam, so did its need for funding. Fortunately, the Company was well supported by individuals who had a close connection to either the founders or to Alzheimer’s disease.  We were also very fortunate to have the significant support of Dr. Geoff Brooke and Brigitte Smith at GBS Ventures, a Melbourne based biotechnology investment fund. Over the following years, we would be fortunate enough to receive significant financial support from other members of the Myer family in addition to significant investment from the Dolby Family, Dr. Alan Finkel and Australian Ethical Investment, all of whom we proudly count as significant shareholders of Cogstate today.

Our focus on measuring cognitive change was central to Cogstate achieving initial sales in the area of sports medicine. In this market, Cogstate technology was used to determine if an athlete’s cognitive performance had changed from his or her baseline as a result of concussive injury.

To this day, Cogstate supports thousands of athletes, both amateur and professional, around the world to manage concussive injury. From Australian Rules football, to rugby, American football, ice hockey, basketball, horse racing and others, Cogstate tests are used to compare after injury test results to baseline results and help doctors to understand if the athlete is thinking the same as they did before the injury. It is also with great pride that we have continued our commitment to supporting evaluation in Australian Indigenous peoples, both in sporting and in other health contexts.

Cogstate grew substantially when we began working with pharmaceutical companies as part of their clinical trials of investigational therapeutics. Today, the majority of staff employed by Cogstate are involved in the provision of technology and services to support pharmaceutical industry sponsored clinical trials.

One way in which our work in pharmaceutical research impacted the company’s development is the location of our offices. In 2005, we were a team of 17 people based in Melbourne. At that time, we were working with a major global pharmaceutical company who found the fact that we did not have operations in the US to be inconvenient. In what would today be considered a very surprising gesture, the customer provided Cogstate with financial support to open an office in the US… provided it was in Connecticut, where their neuroscience team was based.  The office that we opened in New Haven, Connecticut, remains a base for Cogstate to this day – in fact, it is our largest office and is now home to more than 100 full time staff.

Since those early days, we have grown to over 280 team members around the world, with 160 full time staff across our offices in Melbourne, the USA (New Haven, New York and Wausau) and London; as well as 120 consulting neuropsychologists and clinicians across 30 countries.

Through our work in the pharmaceutical industry, we have been extremely fortunate to be able to play a role in the approval of new therapeutics. Cogstate is proud to have been involved in clinical trials for drugs approved for central nervous system disorder including Vortioxetine for major depressive disorder, Lurasidone for schizophrenia and bipolar disorder and more recently Esketamine for treatment resistant depression.  Through our work on these compounds, we hope that we have played at least a small role in the improvement of mental health for people around the world.

One important aspect of the development and adoption of Cogstate science and technology has been the continued commitment to scientific research and the company’s engagement with the Florey Institute for Neuroscience and Mental Health. With his employment at Cogstate in 2000, Paul Maruff was granted an adjunct professorship at the Florey. In this role, he was part of the group that designed the Australian Imaging Biomarkers and Lifestyle (AIBL) study of Alzheimer’s disease. This study was one of the first to utilize positron emission tomography (PET) to detect and measure the amount of amyloid in the brains of people with symptomatic Alzheimer’s disease and in older adults who were cognitively normal. These study participants are still being followed to this day. The AIBL study utilized the Cogstate tests as part of their neuropsychological assessment battery. Data arising from this study has demonstrated how the Cogstate tests are sensitive to the effects of amyloid very early in the course of Alzheimer’s disease. These studies have also now resulted in PhD degrees being awarded to four scientists and more than 100 publications that use Cogstate tests as part of clinical-pathological descriptions of the disease.

The Original Vision for Assessment in the Community

Cogstate has also remained true to our original ambition, to use technology to provide cognitive testing to the community.  The Cognigram system, based upon four of the first card tests designed by Paul Maruff in the 1990’s, is a simple and scientifically valid computerized test, intended to aid healthcare professionals with rapid assessment of cognition in individuals aged 6 – 99 years old. Cognigram is HIPAA compliant and has been reviewed by the FDA following a 510K application for a class II medical device.

It was with great pride that, in August this year, we announced an agreement with Japanese pharmaceutical company, Eisai, to launch Cogstate technology in the community in Japan. After initial pilot deployments, we expect the first sales of the joint collaboration to occur early in 2020 – a truly exciting occasion. We are quietly confident that the coming years will see cognitive testing become a routine part of periodic health assessment globally, and we believe that Cogstate is uniquely placed to support that need.

As I reflect on this 20-year anniversary of the company’s founding, I am extremely proud of the many achievements of the hard-working team at Cogstate over these two decades. I honestly believe that this is a very special company that will continue to make important contributions to improving brain health around the world, and I am honored to have been associated with Cogstate since its inception.