As life expectancies around the world increase, our brains become more susceptible to age-related disorders such as Alzheimer’s disease (AD), and the earliest symptoms can be subtle. The research efforts for therapies that slow or prevent AD involve large clinical trials that require participants who have the disease but who are experiencing only very early signs of cognitive decline. To find optimal study candidates, large pools of potential participants need to be screened in the most efficient way possible. The use of online health registries shows great promise for addressing this important need. Central to this utility is the ability of the neuropsychological tests used in these registries to both detect cognitive impairment on single assessments as well as to identify the subtler changes in cognition that can occur over time. 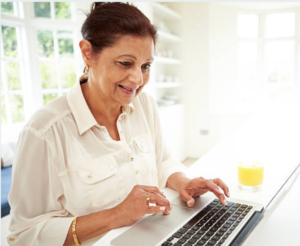 Since going live in 2014, the Brain Health Registry (BHR), an affiliated service of the University of California, San Francisco, has registered over 52,000 volunteers to take part in one of the largest general-purpose brain health registries in the world. After signing-up on the BHR website, a participant is taken through a series of questionnaires; including demographics, health history, medication use, memory issues, family history, mood, sleep, diet and exercise. While this data helps capture a snapshot of the entire person, another particularly important component of BHR comes from repeated neuropsychological tests, which include the Cogstate Brief Battery (CBB). The Cogstate tests used in the Brain Health Registry are unique in that they’re specifically configured for unsupervised self-administration on internet-connected computers. This capability enables the registry to achieve large-scale and repeated assessment of cognition in BHR registrants. However, to ensure that the cognitive testing results that are captured in this manor are accurate and useful, the tests must be clinically validated.

To that end, researchers at UCSF and Cogstate recently published the results of a study that showed high correlation between the CBB and reported cognitive decline. In previous research, the CBB has been extensively validated in supervised environments across a variety of patient populations including those with mild cognitive impairment (MCI) and AD. As part of the BHR questionnaires, participants are asked if they have a family history of dementia or AD, and whether they have been diagnosed with MCI or AD or have concerns about their memory. By comparing these self-reports with the results of their CBB testing, the researchers were able to discern if the CBB, in an unsupervised environment, was a valid test to find other BHR participants with potential markers of cognitive decline.

Of the entire database of 52,000 BHR registrants, 6,463 were selected for the study. All were 55 years or older, had completed at least one CBB test as well as their family history questionnaire, the memory concern questionnaire and also provided self-reported information on previous diagnoses of MCI or AD. The study findings suggest that age, self-reported diagnoses of MCI and AD and memory concerns were associated with worse performance on the unsupervised, online CBB tests. No association was found between family history of dementia or AD and CBB test results.

“In aggregate, our data show preliminary support for the use of online research registries that use cognitive assessments as a significant avenue to improve clinical research trials by maximizing the efficiency of participant recruitment,” wrote the researchers. “In turn, improvements in participant selection would decrease the time required to complete clinical trials and decrease the cost of such trials—two major obstacles in developing more effective treatments for AD and other neurological disorders.”